Arch Capital Management has agreed to acquire a commercial building in Hong Kong’s Sheung Wan area, the Hong Kong-based fund manager has confirmed to Mingtiandi, with sources familiar with the acquisition citing a price of HK$1.9 billion ($242 million) for the 32-storey block.

The private equity firm co-founded by veteran Hong Kong property fund manager Richard Yue is purchasing 69 Jervois Street with plans to profit from the expansion of the Greater Central business district as it expands westward into the neighbourhood just one subway stop away from the world’s highest office rents.

Arch Capital, which concluded the transaction in April, is said to have acquired the 102,177 square foot (9,492 square metre) asset, which is also known as the Tung Seng commercial building, from private entities believed to be controlled by industrialist Paul Cheung Kwok Wing, the chairman of Hong Kong-listed Kingboard Holdings.

“69 Jervois Street is one of the few good quality, single-ownership office buildings in Sheung Wan, one of the prime, office submarkets on Hong Kong Island,” sources at Arch told Mingtiandi. “The property is well-positioned, in terms of building quality and in its location, to capture a piece of the positive momentum in the Hong Kong office sector. Some asset management would further increase the income potential of this unique asset.”

“The close proximity and the large differentials of the two sub-markets would continue to draw good-quality tenants, who would like to remain within close proximity to Central, to relocate to Sheung Wan,” the Arch representative said.

The fund manager is paying the equivalent of HK$18,595 per square foot to purchase the 20-year-old, single-owner commercial building. Already 100 percent occupied, according to Arch, the company believes that enhancement to the property and its management could squeeze additional income from the tower, which occupies a 6,189 square foot site approximately two minutes walk from the Sheung Wan MTR station. 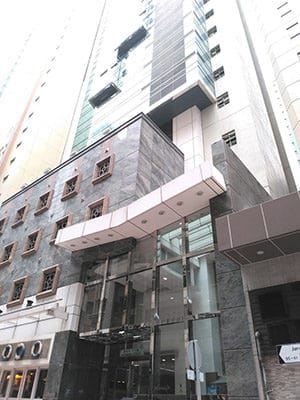 Current listings for office space in 69 Jervois Street feature asking rents of more than HK$46 per square foot, and, at that rate and given the current occupancy level, Arch Capital would be buying the property at an initial yield of approximately 3 percent, according to Mingtiandi’s calculations.

Currently, the ground level of the tower is dedicated to food and beverage outlets, while the 7th through the 34th floors provide office space above car parking on the first through fifth levels.

Market talk in March had Arch Capital partnering with Hanison to acquire the building, although neither party responded to requests for comment on reports of those discussions.

London-based property consultancy Savills, which had represented the Kingboard Group in an earlier but ultimately unsuccessful attempt to sell 69 Jervois Road for HK$1.55 billion in 2015, is understood to have brokered the disposal on behalf of the seller.

Kingboard Group had originally purchased the office building from developer Nan Fung Group for HK$1.24 billion in 2010, with the company realising a capital gain of approximately 80 percent over its nearly decade-long ownership of the asset.

Of late the real estate fund manager has turned its Hong Kong efforts toward co-living projects, including opening the second location of its Oootopia rental housing startup in the Tai Kok Tsui area of Kowloon in early May.

The company has already declared its intention to open at least two more of the shared living centres in the city within the near future.